If you've been living under a rock for a while, you could be forgiven for not knowing about Terraform and how awesome it is. Today, Terraform is one of the hottest new tools in the Cloud Automation space. Terraform can allow you to manage infrastructure as code for nearly any cloud platform, such as AWS, Azure, Google Cloud Platform, vRA, Kubernetes the list goes on. It's an easy to use tool that has tremendous potential for efficiency for anyone that deploys infrastructure using any popular cloud platform.

In a few words, let yo mama know: Terraform is a big deal.

The reason this is so interesting for the VMware community is because just recently, VMware released a plugin that allow you to use Terraform with vRealize Automation 7.x. This is what we'll be covering in this article. So before we get into the meat of this subject, let's spend a bit of time breaking down what Terraform is and why you should care.


terraform init – What is Terraform?

Terraform is an open source tool created by HashiCorp to provision and manage infrastructure components. It is often referred to as "Configuration Management for Infrastructure". In other words it is comparable to tools like Chef, Puppet or Ansible, but it works on a different level than those tools do, on the infrastructure automation level, rather than on the VM configuration/orchestration level.

Terraform uses a proprietary configuration language called the HashiCorp Configuration Language or HCL. It is essentially a language that allows you to write configuration files, using a declarative model to manage infrastructure as code. It uses the principle of applying a "Desired State Configuration". That's basically where the term "Immutable Infrastructure" comes from. Since Infrastructure components are so easily replaceable using a cloud platform and Terraform (or other tools like it), it makes more sense to destroy and recreate objects than to actually care for existing objects and bring them up to par, configuration-wise.

Terraform is distributed as a simple executable for Windows, Mac or Linux. It functions using a client-only architecture, meaning you don't need to have a dedicated Terraform server, you can run it from your laptop or jump server. Normally you would add the folder in which the Terraform executable file is found in your Operating System's "$PATH" variable to make sure you can run it no matter where you are. When you run terraform (through the command-line, always), it will look in the CLI working directory for configuration files with the ".tf" file extension and will read those as configuration files. You can also have separate "Variable" files with the .tfvars file extension to keep your usernames, passwords and other sensitive information hidden away.

That's the basis of how Terraform works, here's a bit of lingo you'll need to get by in the Terraform game:

There is of course a ton more complexity to using Terraform to its fullest potential, but for the purposes of this article, this is essentially all you will need to know to be able to use Terraform with vRA.

terraform plan – How to use Terraform with vRealize Automation

When you start using any infrastructure as code tool, you need to get your workspace set up. I like to use Microsoft Visual Studio Code (it's free!) to code Terraform. VS Code has a Terraform plugin for syntax highlighting that makes your code nice and colorful. You'll also want to use a Source Code versioning tool, Github.com or any private Git/SVN server will do. Next comes installing Terraform and the vRA Provider plugin. Terraform itself is, like I mentioned, just an executable that you will need to download and execute. Whereas for the "vRealize Automation Provider for Terraform plugin", that's another story. You're going to need to follow the instructions on this Github page to compile the executable and you'll need to keep that with you to use vRA as a Terraform Provider.

As far as functionality goes, at this point in time, the Terraform Provider plugin for vRealize Automation 7.x is pretty basic. It's doubtful that it will be able to cover all the use cases of when you need to create/modify/delete infrastructure components through vRA, so you shouldn't plan to cut off access to the vRA GUI just yet. However, if you can benefit from even this basic functionality and enjoy learning new technologies, then you can have quite a bit of fun combining Terraform and vRA, as did I. Keep in mind, this plugin is very new, it's only a few weeks old. It is definitely a work in progress and new changes are being made to it regularly. If you're reading this article in 2019, a lot might have changed with the state of the plugin since late 2017.

As it stands today however, here's the functionality you can get out of the vRA plugin for Terraform:

A few limitations to be aware of:

You will probably encounter more limitations like these ones as you start to use the plugin for your use case.

I realize that so far, I probably haven't convinced you to use Terraform with vRA yet, because after all, the limitations and the immaturity of the plugin are pretty imposing. So let's move on to a few scenarios where you could benefit from using Terraform.

terraform apply – Why should I use Terraform?

A few use cases I've come across for using Terraform are :

As Terraform and its integration with vRA become more mature, the list of use cases will surely grow and give more and more power to Terraform to control vRA. 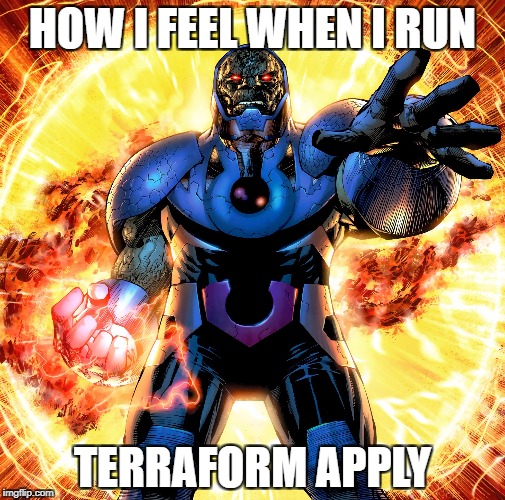 From the list of use cases above, you might be thinking that you can already do some of those things using other methods or tools. So let's explore other options and alternatives to Terraform.


All in all, the Terraform integration with vRA is not perfect. But for the use case we are focused on in this article, which is for provisioning environments using many different vRA blueprints, it fits the bill quite well and can make you significantly more efficient.

If you want learn more about Terraform, here are some resources to get you started:

If you build your blueprints in a certain way, where Terraform can be the one to call them in a given order or just in batches, you just might be able to create the perfect recipe with Terraform to significantly increase your efficiency when deploying them. As time goes on, the Terraform and vRA combination will only get sweeter. The Terraform plugin for vRA came out of its shell just a few short weeks ago and is already showing its awesome potential and it will only get better as the community contributes to the project.